Subjects Addressed in the answer to Eric B's questions:

Question: Dear Lenore: I am someone who is interested in type theory; and particularly now trying to fully understand the cognitive process model; especially regarding those other than the four normally used to define type (i.e. "the shadows"). I had become exposed to John Beebe's model in type discussions online, but as most of his material is delivered by lecture, I have only been able to gain bits and pieces of it; some through your "Implications of Beebe's Model from a Neurological Standpoint" article, and some from Linda Berens, Haas & Hunziker and others.

In many discussions, it seems to be assumed that a person's "shadow" functions are hardly ever used. The authors I mentioned imply they come up only under stress, and with some development, the positive side of the archetypes might be accessed. So it seems in practice, an INTP is expected to almost never display or show signs of Fi or even Te. People will even try to type a professing NTP as NFP or NTJ if these functions are perceived from their writings. There is also a common stereotype of Thinkers; especially NT's, as almost emotionless. And thus many others who do seem to have strong processes that should be mutually shadow remain confused as to what their "best fit type" is, and often bounce back and forth or use X's.
- - Eric B. INTP

Lenore Answers: I know exactly what you mean. But I'm not sure if I'm going to be helpful to you or just seem to be heading down a different track than the one you're asking about.

I say this, because, over the past few years, I've found myself drifting somewhere outside the general consensus where type theory is concerned, particularly as it's joined forces with temperament theory.

It's difficult to even explain that statement, because the two models are now understood to be different ways of looking at the same aspects of the personality. That is, a type preference has come to be understood as the cognitive skills and strategies that best meet the core needs of its respective temperament pattern.

The problem here, for me, is that Jung doesn't describe type preference in terms of strategies, or even as eight cognitive skill sets. He describes type preference as a psychological orientation, based on one of four functions, Sensation, Intuition, Feeling, and Thinking. These functions are in service to the ego -- our means of conscious discrimination.

As I see it, a differentiated function is not a cognitive process. It's the means by which emotion is integrated with the operations of the executive brain in the conscious decision to take action.

Undifferentiated functions remain allied with the unconscious emotional subsystem, and they're always operating to bring their products to consciousness. But their products may not reach awareness unless they're consonant in some way with the interpretive principles the dominant function has set up.

This is why developing behavioral skills associated with a function is, in general, a positive thing. It broadens the sphere of options that we recognize within the context of our type preference. New solutions to old problems become available to us.

Doing this, however, bears no immediate relationship to "individuation." Rather, it results in ego maturation, an expansion of conscious potential.

Individuation, by contrast, builds a bridge to unconscious aspects of the psyche, by way of art or religion or dreams, aligning ourselves with sources of guidance that the cognitive system can't co-opt on its own terms. This *reduces* our identification with the dominant standpoint's interpretive selectivity, rendering the ego and our functional preferences less important.

To put this somewhat differently, the functions represent four different ways that our unconscious emotional subsystems are brought into relationship with our higher mental operations, moving them into the stream of consciousness. As such, the functions aren't cognitive processes. Rather, they make our emotional energies available to the operations of the executive brain.

These aren't "skills" that match up with different functions; they're the cognitive basis on which all functions operate.

When we differentiate a function, we turn it into a consistent cognitive channel for our emotional energies, so that we feel an emotional investment in the discriminations we're making. And we feel in control of our emotional life on that basis, as we inhibit some immediate reactions for the sake of personal or cultural advantage. This is how an accustomed orientation becomes habituated.

My contention, therefore, is that type preference liberates us from instinctual determinism by way of conscious discrimination, whereas Temperament Theory understands preference to confirm an underlying archetypal determinant.

With respect to the latter understanding, it seems to me that most of the monographs in Jung's "Psychological Types" serve to distinguish type theory from the credible temperament theories existing at the time. In each chapter, Jung explores the common ground a popular temperament theory shares with his type theory, then proceeds to show that the apparent kinship is superficial, and that the temperament theory being described is concerned more with affective determinism than with psychological orientation.

Jung points out, in fact, that when temperament moves us to react immediately, without discrimination, we don't congratulate ourselves on being natural and authentic. We're more likely to say that we "weren't ourselves," or momentarily "lost" it. What is it that got lost? Our distinctly human ability to channel or inhibit a natural reaction for the sake of a conscious purpose. This is what we mean when we say we make free-will choices -- we commandeer or block natural tendencies for the sake of an aspiration or a goal.

Jung explicitly says that this is what he wanted to capture with his type theory -- not a way to characterize people by way of innate qualities that can't be controlled, but a way to classify how people make choices they feel free to make, believing that one thing is better than another -- even when it *doesn't* meet their immediate affective needs. The consistency of such free-will choices over time becomes a pattern -- not because it's inborn, but because we become accustomed to interpreting and responding to life in a way that we find satisfying and comfortable.

Jung didn't deny the influence of temperament altogether. He accounted for it, in classic neurobiological terms, by way of the attitudes. Some people, he said, have strong biological constraints with respect to approach and withdrawal, and they can be psychologically harmed if they're forced into choices in conflict with their natural tendencies. On the other hand, he also said that most people are adaptable enough to meet prevailing social expectations, pointing to the general Extraverted attitude of Americans as a good illustration.

Next Page - Different meanings of Temperament


Go Here to Learn more about The Myers-Briggs Test * 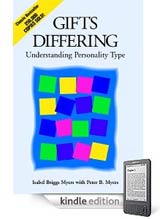